Here is Sally’s write-up of a great weekend… 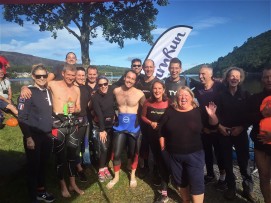 If you noticed that the Saturday morning session was quiet last weekend it was because it seemed like half of Cally Masters had decamped to Wales to take part in The Big Welsh Swim. Seventeen swimmers from the Cally travelled to deep dark Wales to take part in the open water event in Lyn Padern (a lake!). It really was a perfect event with something for everyone – distances that attracted a variety of swimmers from the club – distances available ranged from 1.5k up to 9k,  and you could swim in a wetsuit or ‘skins’.

Ominously the week started out with a rather alarming email from the organisers saying that Saturday was going to be WINDY – who then outlined many ways you could downgrade the distance you’d decided to swim ‘if you felt like you wanted to’. Not very auspicious.

However the gales forecasted only lasted on Friday, and by Saturday morning, at the start of the event, the skies were blue, the lake was calm and looked – dare we think it – inviting!

Lyn Padern is 3k long, and a little tourist  train runs the length of it. So the swims were one-way, two-way or three-way depending on what you’d elected to swim. We all met before hand at registration for morale-building/nerve-calming/team-photos. Jo C turned up just in the nick of time as registration was closing, and Dylan had to walk for an hour down from his hilltop campsite to get there – talk about a good warm up! It was great seeing everyone at the start.

We had entries in every category of race except the 1.5k:

Nick, Amy, and Jo swam the 3k (also swam by a Parliament Hill lido friend of Dylan and Cath’s – Janet – who we adopted for the weekend).

With the training for this being ‘sketchy’ from various quarters, and with some people carrying injuries, everyone was delighted to have finished their races.

Amazing results from everyone for finishing – especially Dylan in the non wetsuit category  (although Dylan is in the middle of his Channel training so probably saw a mere 9k swim as a taper). In the 9k there was yet another clean sweep 1-2-3 for our great competitive Cally men and also a 1 and 3 placing for Cally women showed us as a strong team. Amy deserves a special mention for coming overall 1 in the 3k – ahead of any of the women and the men. We were in the top three for at least one category for all distances!

This event really does have something for everyone – a variety of distances, not too cold water (17.5C), amazing scenery, a little train ride (!) and good organisation. Llanberis is a sweet little town that very nearly coped with an invasion of hungry swimmers as well as a whole swathe of runners who were setting off the following day for the Snowdon marathon!

If you need any more persuading to come and take part in an event like this then here are a couple of pictures of the Saturday evening meal and the Snowden hike led by Gary on the Sunday morning. 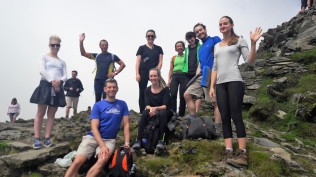